For Cinco de Mayo I am making fajitas: spicy from two kinds of chili,  fragrant with lime, and tipsy on beer.  This recipe was inspired by my late brother-in-law and Texas barbecue master, Larry Luna. The juicy and flavorful chicken is twice cooked, first on the grill, then braised in the oven with its marinade.  I made  chicken fajitas  here, but you can also make them with skirt steak. Marinade the steak for at least 3 hours, grill it whole, then cut across the grain into strips before braising it in the marinade.

1 cup light-colored beer such as Tecate

4 bell peppers (1 red and 3 green), seeded and cut into strips

If using skirt steak, slice against the grain and cut into strips. Trim off the fat. Using a tenderizing mallet, pound each strip so that the tenderizing marks show. This is a good way to work out your frustrations and aggressions.

Add chilies to boiling water and let soak for at least 15 minutes. Peel lime zest with vegetable peeler into a long strip, then juice limes. Pour beer, 1 Tb olive oil, and lime juice in blender. Add chilies, jalapeños, soaking water and other seasonings to beer mixture. Whir in blender. Trim fat off of breast, cut into strips, and marinate for an hour or more. 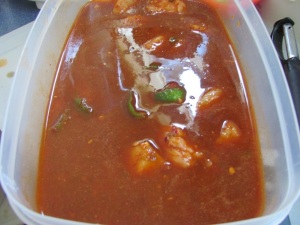 Place chicken on grill, reserving marinade. Put bell peppers and onion in a grill wok and toss with a tablespoon of olive oil.  Grill over medium heat until chicken and onions and bell peppers begin to char. (You can also use a wok or heavy pan over the stove). 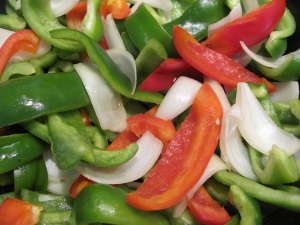 Here’s a variation of my Italian  herbs and eggplant dish that I created as a side dish for a barbecue. It is vegan!

7 Italian eggplants (the long, skinny ones)

Spray eggplants and red bell peppers with olive oil and gill until they soften and eggplant changes color to brown.

eggplant and peppers on the barbie

When they cool, slice into bite-sized pieces.

While eggplant is cooling, mince garlic and rosemary. Quarter the onion and slice into crescents. Toss with rosemary and garlic, 1 Tb. olive oil and sprinkle with salt. Barbecue in a grilling basket sprayed with olive oil. Slice ends off of the mushroom stems and cut caps into quarters, and chop oregano.

mushrooms and onions cooking in the bbq basket

After 5 minutes, add mushrooms and oregano to onions, and barbecue for about 10 minutes, until the vegetables are cooked. Add to the eggplant and red bell peppers.