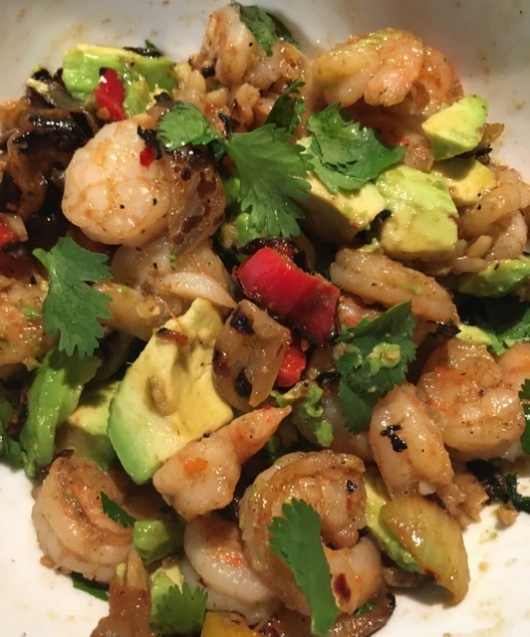 On our first date, my husband and I cooked Camarones al mojo de ajo. We’ve been in love ever since.

I love the Spanish word for garlic clove: diente, which also means tooth. And there is some resemblance, come to think about it.

2 Tb olive oil
3/4 lb large raw shrimp
1 head of garlic
A few shakes of red chili pepper flakes
¼ cup dry white wine  such as Chardonnay
1 lime, juiced
large pinch smoked Maldon salt to taste (you can use regular or sea salt if you don’t have that)

Defrost shrimp in in the refrigerator overnight or in a colander under cold running water for 7 minutes. Peel the shrimp and save the shells in the freezer for a future batch of shrimp broth. If you are planning to eat the shrimp with your hands, keep the tails on. But for tacos or pasta, remove them.

Smash the garlic head in a molcajete (mortar and pestle made of volcanic rock). This will loosen the peel, separate the dientes, and smash the garlic to release the flavor. Discard the garlic peel and finely mince the garlic. Mix with the peeled shrimp.

Heat olive oil in a wok or large heavy frying pan.  Add garlic and the shrimp. Toss with a metal spatula until the shrimp turn completely pink. Sprinkle with a little red chili pepper flakes. Squeeze in a large lime and add wine and scrape the pan. Salt to taste. I used a few grinds of smoked sea salt.

To make tacos, I first fry half a sliced onion and a bell pepper (you can sub a cup of frozen bell peppers) in olive oil, then set aside in a bowl. Fry the shrimp in the same pan and then mix with the onions and peppers. Cut half a large avocado (or a whole small one) into chunks, and separate cilantro leaves from stems to make about 1/2 cup of leaves. Mix all ingredients together and serve with homemade tortillas