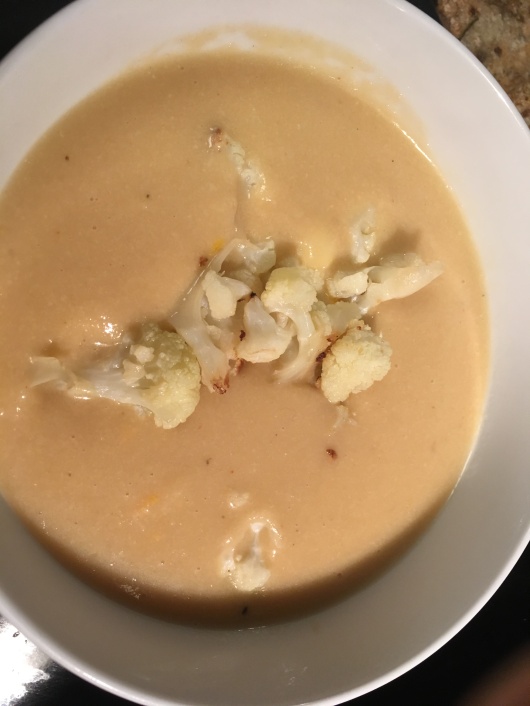 This simple soup is a delicious warm-me-up on a cold day. Roasting the cauliflower adds a nice flavor to the soup. Creamy without adding cream.

4 cups chicken broth. You can substitute vegetable broth for a vegetarian soup.

Salt and pepper to taste

Cut the cauliflower into florets, toss with olive oil and sprinkle with sea salt in a baking pan. 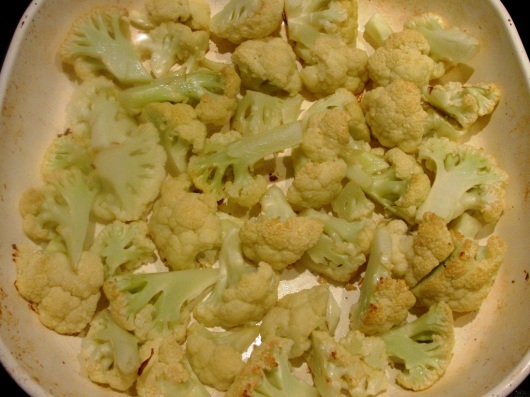 Roast cauliflower for 20 minutes, until it is golden brown and crispy at the edges.

While cauliflower is roasting, chop onion and saute in olive oil in the bottom of a big heavy saucepan. Smash and mince garlic and add to onion. Saute over medium heat until translucent. Add the chicken stock (or vegetable stock) and heat to boiling. While soup is heating, peel the potatoes and chop into small cubes. Add to the boiling soup.

Add most of the roasted cauliflower, reserving about 1/3 cup for garnish. Let soup cook over medium heat for 15 minutes, or until potatoes are soft.

While soup is cooking, grate the sharp cheddar cheese.

When potatoes are soft, add the soup in batches to a blender. Blend in batches and set aside in a large mixing bowl. Add the cheese to the last batch, then pour back into the pot. Pour all the blended soup into the pot and heat until it’s hot enough to serve, stirring well. Adjust salt and pepper.

Pour the soup into bowls. Garnish with the reserved roasted cauliflowerets. 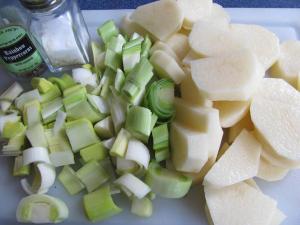 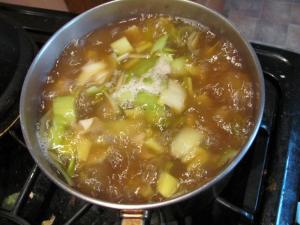 boiling potatoes and leeks in broth

Boil in the broth until soft, about 15 minutes. Add salt and pepper. 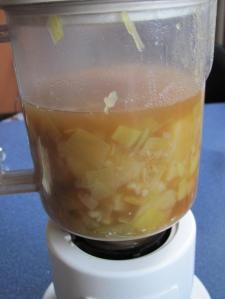 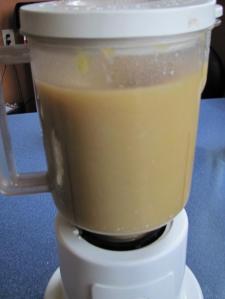 potatoes and leeks in broth in blender

Let cool, then blend until pureed.  (If  you have a immersion blender, you blend it in the pot.)

Cheese Soup (no cream or butter!) 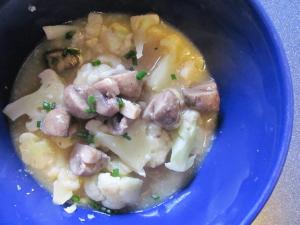 Cauliflower with cheese and Mushroom Sauce

Boil cauliflowerets in broth for 5 minutes until soft, then remove with slotted spoon. Pour cheese and mushroom soup over them and top with minced fresh chives. 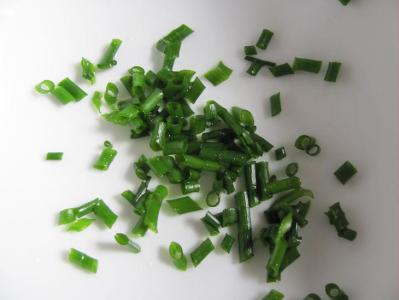