My children’s Abuelita Conchita made tamales every Christmas. After marrying her son, I do too. She visited us on our first Thanksgiving together and taught me how to make them with our leftover turkey.

I’ve been tweaking the recipe ever since.  I now make them with boneless chicken breasts with a few legs for flavor. The boneless breast eliminates the risk of choking on a rib bone, which are easy to miss while shredding the chicken. I also make vegetarian tamales using frijoles pintos, roasted chili and jack cheese.

I make my masa with olive oil, with a bit of chicken fat and bacon grease for flavor. That kind of balances the heart-healthy effects of the olive oil. 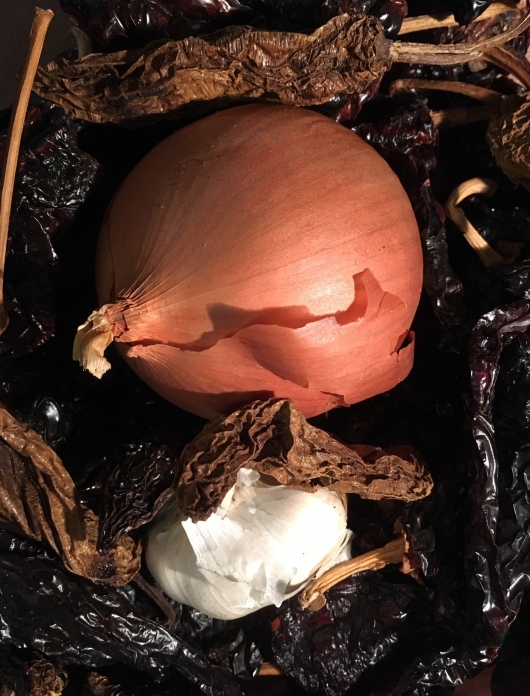 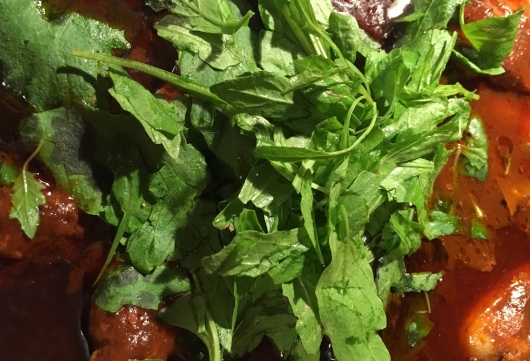 16 cups of water (To use some of the sauce for frijoles, increase the water to 17 cups.)

1 bunch epazote, leaves only (pictured above)

Heat a large pot with the water and bring to a boil.

There’s the easy way to add chili to the broth, which my mother-in-law did, by adding chili powder to it.

Then there’s the labor-intensive way, adding fresh poblano and dried pasilla chilies. Pasilla chilies are dark and wrinkled, like giant raisins (pasa is raisin in Spanish) They make for a more intense, earthy flavor. I also add dried morita chilies and dried chipotle chilies which look like a pieces of wood!

I use a cast iron comal (coMAL), which is a shallow frying pan to toast the chilies and peppers to intensify their flavor. I wear thin disposable latex gloves when I work with the dried chilies and poblanos. This way I emerge from the process without stained and sore hands and can rub my eyes afterwards without fear of blinding myself. 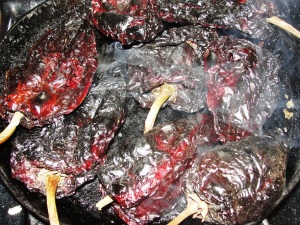 Rinse the dried chilies and pat dry. Toast them lightly on the comal. If you don’t have a comal, use a heavy frying pan. Sometimes the pasilla will blow up like a balloon! Remove them to a plate while they are still soft.

Wear gloves for this part: Discard the stems and some of the seed pods from the chilies and but keep some seeds for spiciness, depending on your taste. Boil the chilies for 10 minutes, then turn off the heat and soak them for 20 minutes until they soften.  Remove the chilies and let them cool. Slice them in half lengthwise, scraping out extra seeds,  and add them  to the broth.

While the dried chilies are boiling and soaking, prepare the rest of the broth ingredients:

Blister the Poblano and bell peppers on the comal or if the weather cooperates, the barbeeque. Wearing gloves, cut out the stems and scrape out the ribs and some of seeds of the poblano and discard most of the seeds. Add a few poblano seeds or ribs to make the broth spicier if you want.

Set aside four  poblanos to insert whole into vegetarian tamales. Coarsely chop up the rest and add to the water.

Add all ingredients except salt and chicken, and cook for 30 minutes, stirring occasionally. Let cool for another 30 minutes.

Blend in batches to make the chili sauce.

If making Frijoles pintos, pour out a cup of sauce into a separate pot.

For vegetarian tamales: Salt the sauce to taste. You will use it for mixing in the masa and pouring over the tamales when you eat them.

For chicken tamales: Salt the sauce and bring it to a boil. Add chicken legs, including any fat and skin to render in the sauce, and cook for 45 minutes. Cut chicken breasts into large chunks and add to the legs, cooking for 20 minutes, until done. Remove chicken from sauce with slotted spoon, reserving sauce.

Refrigerate the sauce until the fat solidifies. Skim most of the fat from it, but keep in about 1/4 cup to add flavor to the chicken as it cooks. (If you are short on time, use a fat skimming cup.)  We will add the fat to the masa for flavor. Reserve 5 cups of sauce for the masa.

Pour 2 cups chili sauce into a skillet and heat it Add half the shredded chicken. Simmer and stir until chicken absorbs most of the sauce, but is not too dry. You should be able to see some sauce between the meat. Make the second batch, (I use 2 skillets at a time) then store in refrigerator until ready to use. It’s best to make this part the day before so that the chicken will absorb the sauce while it sits overnight. If you don’t have time, just let it cool in the freezer or fridge.

This is plenty of chicken. If you don’t want to turn it all into tamales,  they are great in tacos or enchiladas.

Vegetarian tamales: Cook  Frijoles pintos the day before. Roast 4 more fresh poblano chilies on a grill or heavy frying pan until the skin chars. Cool in a covered container to aid in peeling, then peel charred skin, discarding skin, seeds and stem, and cut into strips. You can use canned chilies to save time, but I am giving you the fresh recipe, which has a much more earthy and intense flavor. Slice jack cheese. 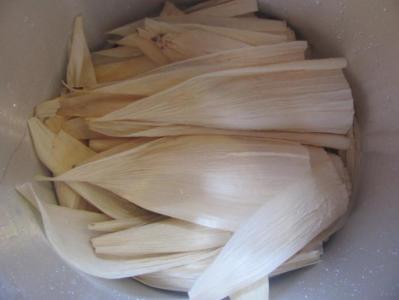 Soak an 18 oz. package of hojas (OH-hass) (dried corn husks) in warm water in a large pot (such as the tamale steamer) until soft, about 1 hour. You can even soak it overnight. I put the steamer pan on top of the hojas and weight it down with a large bowl of water. Rinse them well afterward and remove the corn silk.

Most of the Mexicans I know with swear by lard, the traditional fat used to make tamales. Lard is delicious but very heavy, so I prefer to make my masa with heart-healthy olive oil, combined with some chicken fat for flavorful chicken tamales. I use only olive oil for vegetarian tamales.

I make my masa in several batches, so I can fit it in my electric mixer. I’m giving the 1/2 measurements in parentheses. 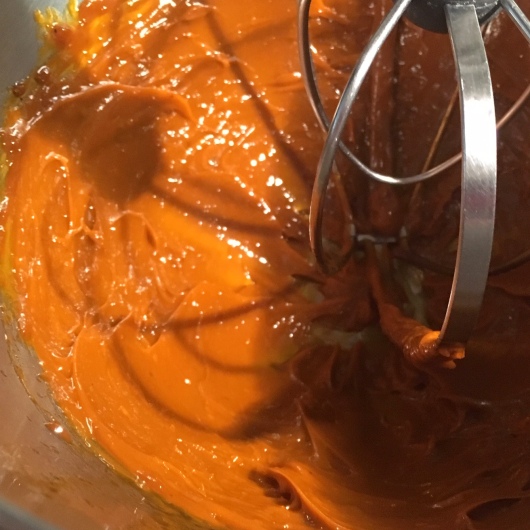 1/2 cup plus 2 Tb (1/4 cup plus 1 Tb) solidified chicken fat. If you don’t have enough fat skimmed from the sauce, you can add chicken fat from homemade chicken soup.

For chicken tamales: Beat chicken fat in mixer on high until fluffy.

Cover the bowl and refrigerate the masa for an hour or so, then return it to the mixmaster. Beat it again, adding more broth if necessary to make a soft dough.

It should not stick to your fingers, and you should be able to form a smooth ball of masa. It should float in a bowl of cold water. If it’s too sticky, add a little masa.

Now you are ready to assemble the tamales. This is best done with your family and/or friends helping – a tamalada. 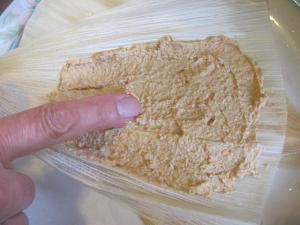 Spread the masa in a thin layer on the wide end of the hoja, leaving  about 3 inches bare on the pointy end and a small border around the sides.. You can use the back of a spoon, or your fingers. I find it works best if your fingers are moist and not too full of masa.

For chicken tamales, put in a spoonful of the shredded prepared chicken. Make it into a long rectangle.

For vegetarian tamales, place a spoonful of beans without liquid, a strip of chili and a piece of jack cheese. Vegans can skip the cheese, or use vegan cheese.

fold in one side

Fold the other side in so they overlap, 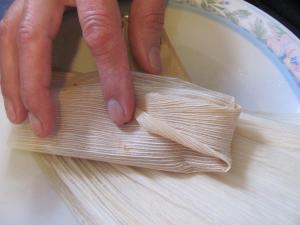 then fold up the pointy end. 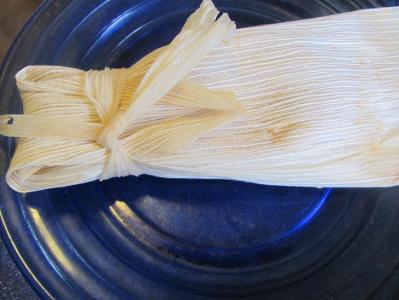 Tear thin strips from several hojas to use for tying the tamales. I use the torn or ugly hojas. Tie tamale with the strip of hoja.

When all tamales are assembled, heat water in the bottom of a tamale pot or large steamer Put a couple of dimes in the water. This is known as a paradigm. Add the tamales with the folded end down and the tied end up on the steamer tray. 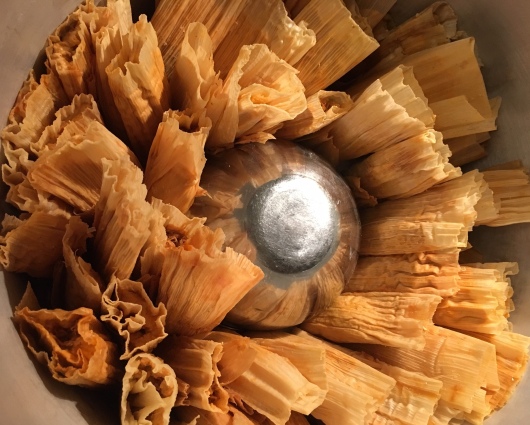 If you don’t have enough tamales to fill your pot, place an metal bowl upside down in the middle of the tamales to hold them upright.

Stretch some foil over the top of the pot to help trap the steam in. Cover the steamer, and cook on low heat for 1 ½ hours. The dimes will rattle in the water. If the water runs out, the dimes will stop rattling and you must add more water or the tamales will burn! Check on it every 20 minutes to make sure theirs enough water. pour the water in through a funnel between the tamales.

When the masa separates easily from the corn husk, the tamales are done. Uncover the pot, turn off the flame and let dry out for 15 minutes or until you can’t wait any longer to eat them!

Unwrap and enjoy with sliced Roma tomatoes. Warm the chili sauce and pour over the tamales, or top with Frijoles pintos.