On Hanukkah, Jews light a menorah for 8 nights and eat foods fried in oil to celebrate the miracle of the oil in the holy lamp lasting for 8 days. Some eat doughnuts, but I prefer latkes, fried potato pancakes.

This is my mother’s recipe, although I tweaked it, adding the onion on my friend Vivian’s suggestion. My mom’s recipe called for matzo meal, which makes for a heftier latkes. For  lighter latkes I use potato starch, and as a bonus, it’s gluten-free.

Peel potatoes and soak in water until ready to grate. Grate by hand or in a food processor. 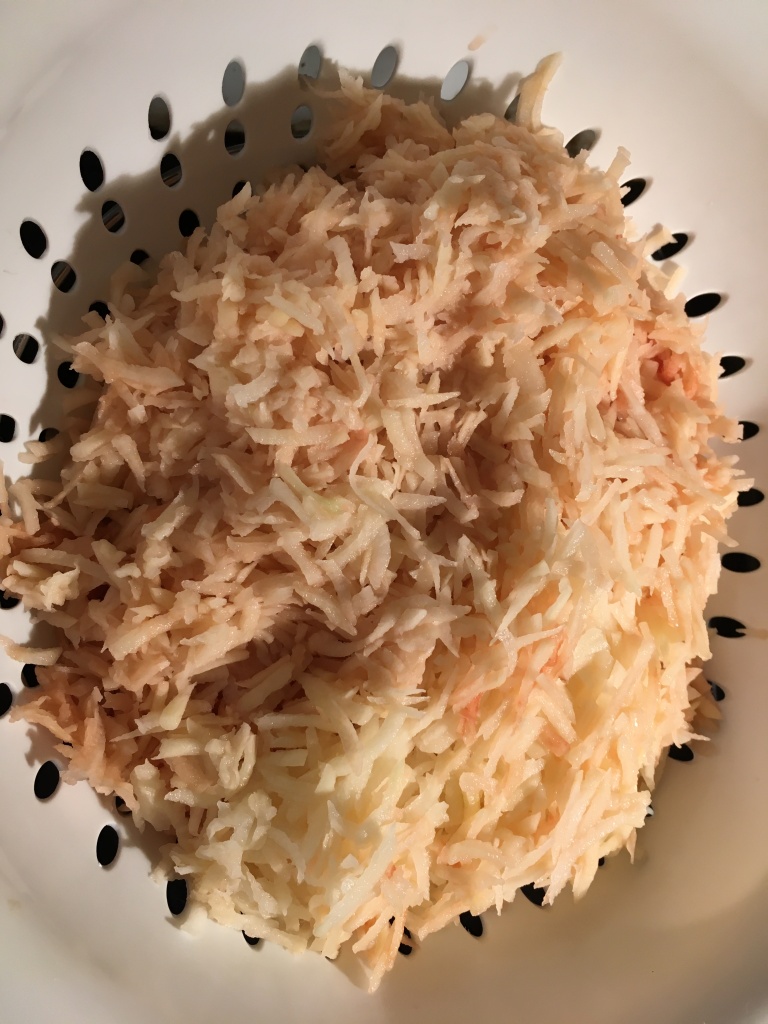 Place grated potatoes in a colander so that they can drain their water, while you mix the rest of the ingredients and the oil heats.

Pour oil into a heavy frying pan, such as cast iron and put on medium high heat until it reaches 375′ (Keep oil between 365′ and 375′ during the frying process.) I use a frying thermometer to gauge the heat.

Grab a handful of grated potatoes and squeeze out the liquid, then place a few handfuls in a clean tea towel. Wrap them up and twist the bundle tightly to release the moisture. Add to the egg mixture and repeat with the rest of the potatoes.

Discard potato water and add the potato starch at the bottom of the bowl.. 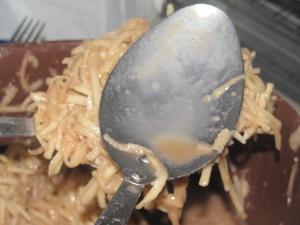 Using a large slotted serving spoon and a large solid serving spoon, mold a spoonful of batter on the slotted spoon, squeezing down with the solid spoon. You will need to squeeze more water out of the potatoes toward the end of the frying. Gently place the latke in the hot oil.

Fry until golden brown, then flip over using long tongs. Don’t crowd the pan; usually 3  latkes are good for a 9” pan. When latkes are golden brown on both sides, lift each one with the tongs and let the oil drain back into the pan.

Place them on a rack over a cookie sheet. Put the rack in a low oven, about 275’. This will help the oil drain from the latkes and keep them warm and crispy until all the latkes are ready to serve.

Serve with applesauce. (Some people eat them with sour cream, but not in our family.)