Run frozen shrimp under water for about 5 minutes until defrosted. Peel shrimp and reserve shells. Marinade shrimp in Thai-inspired Barbecue Marinade for Chicken or Shrimp) for at least 1 hour. Discard marinade, and then barbecue shrimp in a non-stick barbecue basket sprayed with oil. 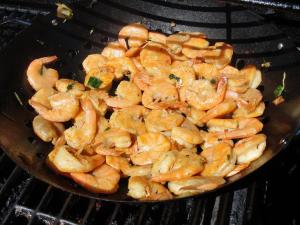 shrimp on the barbie

You can also cook the shrimp in the marinade in a saucepan until the shrimp turn pink. Discard marinade and let shrimp cool.

Boil 2 cups of water and add shrimp shells along with

a slice of ginger

a smashed clove of garlic.

Tear lettuce and rinse and spin in salad spinner and place in a large bowl. Peel the mango with a vegetable peeler and then slice. Reserve juices for dressing. (I squeezed the pit into the dressing.) Add chopped jicama. 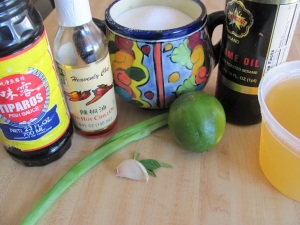 Juice of one lime

1 Tb sesame oil. (These items are in most Asian markets, and often in grocery stores.)

Whisk together, adjusting seasonings to taste. 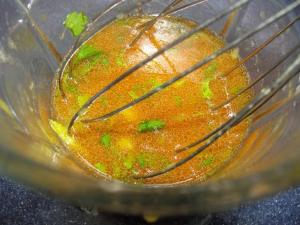 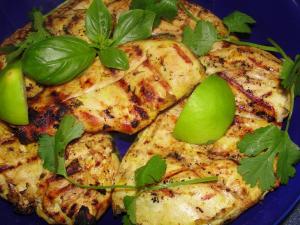 My cousin’s lovely wife, Jeab, introduced me to condiments from her native Thailand, such as sweet-salty oyster sauce and pungent fish sauce. These along with the coconut milk and lemongrass can be found in Asian grocery stores and some large supermarkets. I love fooling around and combining these ingredients with others in my kitchen and herb garden to invent marinades. Frozen garlic and ginger can be found at Trader Joe’s and Berkeley Bowl.

The spices, pepper, onion, lime and herbs add a tangy spiciness to the blandness of the coconut milk. My family likes their food spicy, but feel free to cut down on the chili according to your tastes. If you are on a salt-restricted diet, cut the amount of salt, fish sauce and oyster sauce.

Ingredients: (Enough marinade for about 6 pieces of chicken and 2 dozen shrimp.)

¼ cup coarsely chopped cilantro (you can include stems)

Chop onion and peppers. This is the time to release your emotions and have a good cry!

Remove outer leaves of lemongrass until you reach the tender inner ones. Trim bulb and upper end of stalk where leaves are dry. Use a molcajete (or regular mortar and pestle) or a rolling-pin on the cutting board to crush the slices until softened. The citrus scent will be released. (If you can’t find lemongrass, it’s OK, you can still make the recipe without it!) Slice into 1 inch slices.

Pound chicken breasts and remove excess fat. Make several slits in each breast to enable it to absorb the marinade. 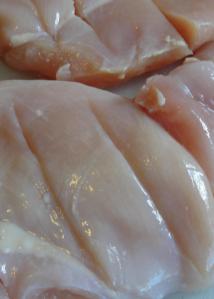 Cut each breast in half and add to marinade, coating each piece well. Marinate chicken breasts for several hours, the longer the better.

chicken and shrimp on the grill

If it’s raining, you can slice the breasts and cook them in the marinade, like curried chicken.

Put the shrimp in Thai-inspired Shrimp and Mango Salad with Fresh Cilantro You can use leftover chicken instead of shrimp in the Shrimp-Mango Salad.

Sliced chicken also pairs well with cucumber and  snap peas. Parboil the snap peas for about 3 minutes, until they turn bright green. Cool under running water, then immerse in ice water to stop cooking. Remove stems and slice in half. Mix chicken and peas with sliced cucumber and garnish with cilantro leaves.

You can also add the leftover marinade to stir fry vegetables, such as broccoli and choy sum or baby bok choy, and mushrooms. Be careful that you only add the tender lemongrass, not the outer inedible parts!