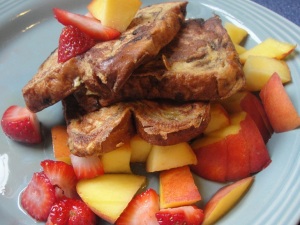 This family favorite is a weekend morning treat after a week of eating muesli. Although French toast made with half-and-half is rich and sublime, this lower fat version, made with 1% milk is really good. Spiced with cinnamon and nutmeg and piled high with fresh peaches and strawberries with a hint of maple syrup, it makes a satisfying breakfast.

Whip eggs with milk, cinnamon and nutmeg. Heat a nonstick frying pan and move butter stick across it until it is coated with butter (about 1 tsp). Dip slices of raisin bread into the egg mixture so it begins to saturate the bread but not make it soggy. Place bread in the pan and fry over medium heat a few minutes until it turns light brown, then flip and fry again.

Serve with fresh cut peaches, strawberries or what’s in season. You can heat frozen fruit and serve as well. I like to spread the fruit on a plate and pour about 3 Tb of maple syrup over the fruit, then microwave for a minute. No need to add extra syrup to the French toast.

One of the great delights of my childhood Sunday mornings was homemade waffles for breakfast. Light and delicious, we love them with the crunch of  pecans in the batter.  I cover these golden waffles with fresh raspberries, chopped strawberries and peaches, and pour Strawberry Sauce or a light glaze of pure maple syrup over them. 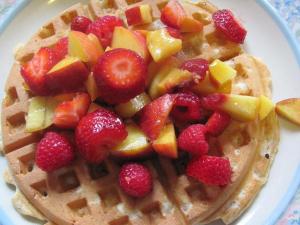 a couple of shakes  salt

Separate eggs. I place each of whites in a cup before adding it to the bowl, just in case a bit of yolk gets in one of them.

Beat whites and cream of tartar until whites are stiff. Set aside.

Beat yolks with milk and vanilla. 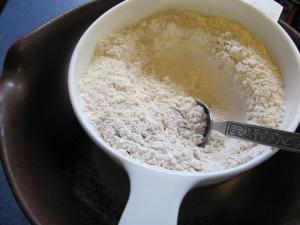 Melt butter. I put it in a small bowl in the microwave for 30 seconds. Beat in butter and pecans.

Fold ½ cup egg whites into the batter to lighten it, then fold the batter into the rest of egg whites. I reserve some whites for the last batches, when it is mostly gone from the batter.

Heat waffle iron until the light goes out. Spray with a bit of coconut oil spray. Pour batter in the center of the iron, until it spreads out about 2/3 full.

Cook until the light goes out again and waffle is golden brown.

Make extra waffles for those sleepy weekday mornings. Make them a bit lighter so you can toast them. Put them between paper towels so they won’t be so soggy. Freeze them between sheets of waxed paper or parchment paper, then wrap in foil or place in a freezer bag.